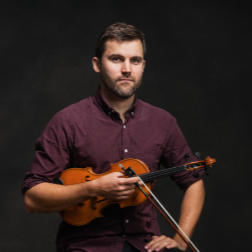 Patrick M’Gonigle began playing violin at the age of seven in Vancouver, British Columbia. He studied classically with Suzuki-trained violin teacher Yasuko Eastman in Victoria, BC and during this time won several awards for his classical music as both a soloist and member of several String Quartets and small ensembles. After several years of touring in Canada with an acoustic dance band, Patrick moved to Boston in 2008 to study at the Berklee College of Music. Upon graduation in 2013, he immediately began a Masters degree in Music from the New England Conservatory, graduating Summa Cum Lauda in 2015 with a performance degree from the Contemporary Improvisation department. In 2012 Patrick formed the Lonely Heartstring Band, a modern acoustic string-band quintet. Since 2012, the band has released an acclaimed record, “Deep Waters” on Rounder Records with a second album “Smoke and Ashes” released in early winter, 2019. In 2015, the Lonely Heartstring Band was awarded a “Momentum Award” of “Best New Band” by the International Bluergass Music Association (IBMA) and in both 2016 and 2017, the group was nominated for the IBMA award for “Emerging Artist of the Year”.