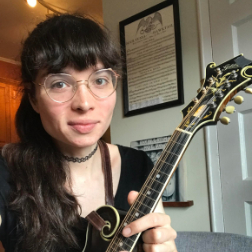 Maddie Witler hails originally from LaCrescenta, CA. Maddie picked up the mandolin when she was 14 and fell in love with the instrument and bluegrass music. She spent the next few years studying with mandolinist Evan Marshall, with whom she worked her way through a lot of Bach, Jazz, and other musical styles, as well as bluegrass. Maddie attended the Berklee College of Music from 2010-2014. While in school she studied with some of her musical heroes including John McGann, Joe Walsh, Julian Lage, Mike Compton, Andy Statman, and many others. Maddie met her band mates in the Lonely Heartstring Band while at Berklee, and has been a member of the band since it began in 2012. Over the years she has also performed with folks like Peter Rowan, Darol Anger, Michael Daves, Tony Trischka, Molly Tuttle, and many others. She currently resides in Brooklyn, NY.