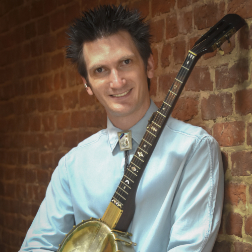 Deemed a “banjo virtuoso” by The Washington Post, Adam Hurt has fused several traditional old-time idioms to create his own elegantly innovative clawhammer banjo style, having been introduced to the instrument at age 11 in his native Minnesota. A respected performer and teacher of traditional music, Adam has played at the Kennedy Center in Washington, D.C., conducted banjo workshops around the country and abroad, and been featured on the cover of Banjo NewsLetter. Since moving south in 2002, Adam has placed in or won most of the major old-time banjo competitions, including three first-place finishes at Clifftop, and he has claimed several state banjo and fiddle championships. Adam’s music can be heard on multiple recordings, including his newest release, Artifacts. Adam's workshops invite active participation, are organized and paced so that attendees can really assimilate material as they go, and create a comfortable space for trying new things.