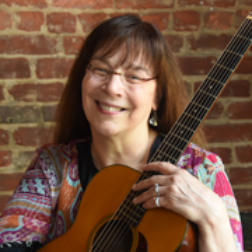 Raised on a tobacco farm in the Piedmont of North Carolina, Beth Williams Hartness began singing and taught herself to play guitar at the age of twelve, developing her own unique finger-picking style. Beth was first introduced to old-time music in the 1980s while living in Charlotte, North Carolina, where she became a founding member of the Charlotte Folk Music Society, serving as vice president and festival organizer. Beth has been a vital part of numerous award-winning string bands, and she has won ribbons of her own in competitions for back-up guitar. Her playing is featured on many recordings including The Young Fogies II, Uncle Henry’s Favorites, In Good Company, A Tribute to the Appalachian String Band Music Festival, and several Adam Hurt projects including his most recent release, Artifacts. She has taught workshops in old time guitar and served as a staff musician at numerous camps, including Banjo Camp North for the last several years.