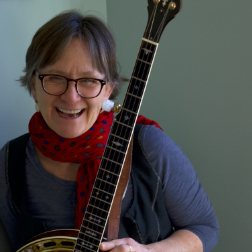 Born to a jazz-trumpeting dad and a Baroque harpsichord-playing mom, Gretchen first became captivated by the bullfroggy syncopation of the banjo after hearing Wade Ward perform June Apple. Although clawhammer style was her first love, Gretchen plays primarily bluegrass and swing. Her banjo playing has been called sparkling and inventive, and her chordally based soloing style on swing tunes has become her hallmark sound. Gretchen has recently begun experimenting with bossa nova on banjo, and she giddily enjoys her role as bass player for the Steely Dan tribute band “The Boston Rag.” Mostly though, you can catch her with Boston-area band “the Bagboys,” who perform their Brand-New Old-Time Songs all over New England. By the light of day, Gretchen is a middle school Spanish teacher, and as such, her teaching style is firmly hands on. Bring your instrument and be prepared to practice the content of each workshop right then and there. While she freely admits that she learns mostly by ear, Gretchen gives handouts and likes to employ overheads and audio when possible. She believes that music is a conversation, that all of us are learning, and that we all have a unique voice to share.