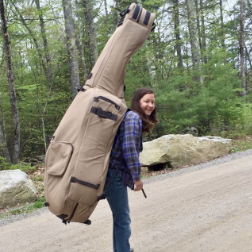 Kelly attended her first Banjo Camp North in 2003 to hone her clawhammer skills and learn about Round Peak. Since then she has attended almost every camp that has been offered playing fretless banjo and then switching to upright bass. In fact, her first time on stage was at a camp concert. Kelly has a day job in tech and plays upright bass with her husband Bruce’s long-running band The Stockwell Brothers. Before joining The Stockwell Brothers she formed a two-banjo band with Bruce and another couple, Hot Mustard, because you just can’t beat two banjos. Kelly is the president and music director of Music Camps North Inc.