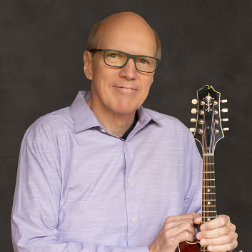 Don Stiernberg recently began his fifth decade as a working musician. Along the way he has been involved in many musical activities: performing, writing, recording, producing, and teaching, but is best known for his mandolin playing. Born and still based in Chicago, the mandolin found Don as he grew up “out in the woods” in the nearly-rural suburb of Wauconda, IL. Things came into focus both mandolin- and life-wise when his parents sent Don to study with Jethro Burns, famous comedian(Homer and Jethro) and the greatest mandolinist of his time. From the very first lesson, Burns was more than a teacher. He was a role model, hero, mentor, and friend, and Stiernberg was hooked and hooked bad on the mandolin. Currently, Don is regarded as a leading exponent of jazz mandolin style,and a respected teacher. The most recent of his nine recording projects is Good Numbers, a collection of standards and jazz tunes played by his working band, The Don Stiernberg Trio, which has performed coast to coast as well as in Germany and Brazil. Don has released four online video instructional courses for Soundslice.com and has conveyed his love of the mandolin and music at events such as Marshall Mandolin Summit(MI), Alan Bibey Mandolin Camp(SC),The Mandolin Symposium(CA), Great Lakes Mandolin Camp(MI),The Swannanoa Gathering(NC), Django in June(MA), Mandolin Camp North(MA),Steve Kaufman Acoustic Camp(TN), River of the West Mandolin Camp(OR), Cape Cod Mandolin Camp(MA), Ashokan Swing Week(NY), Accademia Internacionale di Mandolino(Italy), European Mandoline Akademy(Germany)and Momento Rio Bandolim(Brazil).