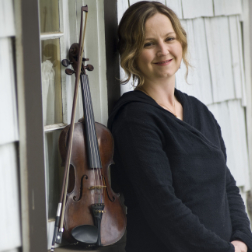 Erynn Marshall is an old-time fiddler who lives in Galax, Virginia and is known internationally for her traditional music. Erynn learned the nuances of Appalachian old-time fiddling from rare recordings and visiting 80-95 year-old southern fiddlers. Still she puts her own spin on the traditional music she plays – sounding authentic, archaic and transportive while playing in a smooth and effortless way. Erynn performs at festivals, teaches at music camps around the globe, and tours with her husband – songwriter and multi-instrumentalist Carl Jones. Her tunes are becoming common repertoire in fiddle circles. Erynn won 1st place fiddle at “Clifftop” (The Appalachian Stringband Festival) and was the first woman to do so. She has recorded six albums and appeared in five films (Voices of Virginia, the Clifftop Experience I’ll Fly Away Home, Conversations with Old-Time Musicians,” plus the upcoming Never Met a Stranger). She is coordinator for Swannanoa Old-Time Week near Asheville, NC.