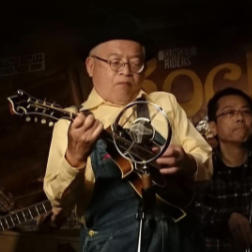 Shin Akimoto, the “Bill Monroe of Japan” was born in Osaka, Japan in 1958, and has been playing bluegrass music since his college days in the mid 1970's. He dates his inspiration to play mandolin to a 1977 Japan tour by Roland White of Country Gazette, cites Mike Compton as another major influence, and is especially interested in the sounds of Bill Monroe's early bands. In the 1980's he came to the U.S. for several festivals and formed a bluegrass band, Shin Akimoto Band, in Japan whose song “Don't Bother Cry” was included in the compilation album “Long Journey Home” produced by the IBMA in 1992. Since then he has performed widely as a professional musician in Japan and the U.S., and has played mandolin with many of the best-known players in bluegrass, including Hazel Dickens, Tim O'Brien, Mac Wiseman, Peter Rowan, Laurie Lewis, David Grisman, Alison Brown, and Del McCoury. “I devote myself to popularization of the music I do love,” he writes in his professional profile , “bluegrass music.”